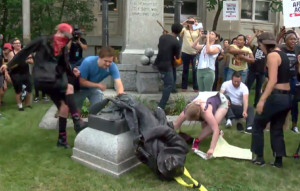 Last night several dozen protesters gathered around a Confederate statue in front of Durham’s old courthouse to speak out against the violent protests in Charlottesville over the weekend.

At about 7:10 p.m. a woman climbed a ladder up the statue attached a rope to the bronze figure, moments later, the crowd pulled the statue down and began to kick the toppled monument.

Here’s a video of the event;

The statue of an unnamed Confederate soldier was erected in 1924, the inscription at its base stated, “The Confederate States of America.”

Durham police later released a statement saying that they were monitoring the protest to make sure it was ‘safe’, but allowed it to continue since it was on county property.

“Because this incident occurred on county property, where county law enforcement officials were staffed, no arrests were made by DPD officers,” Durham Police spokesman Wil Glenn noted.

Governor Cooper commented that ‘there is a better way to remove these monuments’;

Durham County officials issued the following statement regarding the toppling of the statue:

Our elected officials and senior staff understand the unrest in our nation and community, particularly following the senseless acts that took place in Charlottesville, VA. We share the sentiments of many communities around the nation that admonish hate and acts of violence as we believe civility is necessary in our every action and response. Governmental agencies dedicated to public safety will continue to work collectively to ensure Durham remains a community of excellence where all of our residents can live peacefully, grow and thrive.

Several other convederate monuments and statues continue to stand across our state.

Do you think they should be removed?

What do you think of yesterday’s protest?