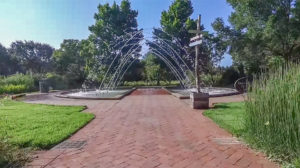 After navigating the threat of Covid-19 for a year, Daniel Stowe Botanical Garden will reopen to the public on March 17. The Garden has operated under various scenarios over the past year, but with vaccinations increasing and the spread on the decline, the Garden will now open more fully 10 a.m. to 4 p.m. Wednesday through Sunday.

The change includes the opening of Lost Hollow: The Kimbrell Children’s Garden, which the Garden has kept closed out of an abundance of caution because it includes numerous touch surfaces and structures that make social distancing a little more difficult. With masking and social distancing becoming more of a norm, garden officials believe it is now safe to open the popular family destination.

“We’ve operated under various guidelines and it seems our guests are more than willing to comply with wearing masks and to respect social distancing,” said Jim Hoffman, the Garden’s interim executive director. “The last time we welcomed the public into the Garden was during our holiday event. We restricted the number of people and directed them in the same path. It seems most everyone felt comfortable visiting.”

Hoffman said the Garden will continue to monitor and follow state restrictions and CDC recommendations. Advance registration won’t be required. The Garden opened briefly to the public last fall with advance registration and had no trouble with daily attendance at the 300-acre garden. If numbers become unmanageable the garden will implement other methods to moderate attendance levels.

The Garden has begun to develop a list of special events for the coming year and will limit attendance or otherwise moderate attendance numbers for those. Those events include a new jazz series the first Thursday of each month April through October. Jazz at the Garden April 1 will feature guitarist Nils Jiptner beginning at 6 p.m. Advance tickets are required and can be purchased at dsbg.org

The month of April will also feature a juried art exhibition from the Gaston County Art Guild. The long-running show, titled “A Natural View” will feature the work of artists throughout the region in a variety of media.

The late Daniel J. Stowe began to develop the Garden in southeastern Gaston County in the early 1990s, setting aside land he began acquiring before World War II. In 1999 the Garden opened its immaculate Visitor Pavilion and a dozen acres of manicured Gardens. By 2003 it had become one of the region’s most popular wedding venues, hosting nearly 100 weddings each year. In 2008, the Garden opened its 8,000-square-foot Orchid Conservatory and in 2014 Lost Hollow: The Kimbrell Children’s Garden. Prior to 2020, the Garden attracted more than 100,000 people annually.