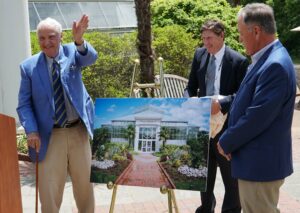 Daniel Stowe Botanical Garden recently recognized one of its most  dedicated, impassioned supporters by renaming a popular Garden destination in his honor. On Thursday,  May 12, The William H. Williamson III Orchid Conservatory was dedicated among its namesake, his  family, community members and Garden leaders.

“This honor leaves me speechless,” said William H. Williamson III, also known as “Bill Will” across the  Charlotte area. “I began donating time and energy to the Garden decades ago because this place brought  me joy. My travels around the globe brought me to many spectacular botanical gardens overflowing with  colors and visitors, and I strongly believed that Belmont deserved the same. As our Garden came to  fruition, it was a chance for me to contribute what I could to these beautiful, flourishing acres and the  breathtaking experience they offer worldwide guests. I’m proud of the progress the Garden has made,  including this stunning Orchid Conservatory.”

Williamson has served the Garden in a variety of volunteer capacities since its inception. His  commitments include co-chairing the campaign to construct the Orchid Conservatory as well as chairing  the Board of Visitors and membership among the Board of Directors. Williamson is a Charlotte native, a  U.S. Army veteran, an avid golfer, a husband, a father, a grandfather and a great-grandfather, and retired  from a long, successful career in business economics.

Simply called The Orchid Conservatory since its opening in 2008, the striking 8,000-square-foot, five story, glass-paned preserve – now named in Williamson’s honor – is dedicated to a robust display of  orchids and tropical plants. Breathtaking features include a waterfall, cocoa tree, showy blooming orchids  and seasonal exhibitions. Williamson played an integral role in bringing this stunning Garden asset to life,  giving way to this springtime dedication to him.

Said D. Harding Stowe, chairman of the Garden’s Board of Directors, “Bill has poured love into his every  endeavor with the Garden. He’s been an admirable example of dedication and support since this  blooming attraction was only a dream. There’s no better person, better Garden enthusiast and advocate, for this recognition and we look forward to the William H. Williamson III Orchid Conservatory continuing to  blossom in his honor for generations to come.”

Added Williamson about the dedication honor, “Daniel Stowe Botanical Garden holds a big piece of my  heart and I’m so privileged to forever be a piece of its beauty now.”