One of the most beautiful and most dangerous sea creatures in the world is starting to wash up onto Carolina beaches.

On Thursday, a South Carolina Police Chief alerted his followers of the dangerous creature.

Chief Cornett posted a picture of the creature on his Twitter page, telling his followers; “They look pretty cool but they can have a pretty hard sting. If you see one please don’t try to pet it…”

Followed some of IOP’s finest on some calls this morning. The first dealt with a snake & the second dealt with this beautiful man-o-war. They look pretty cool but they can have a pretty hard sting. If you see one please dont try to pet it. @IsleofPalmsPD #BeachPolice #manOwar pic.twitter.com/ObMuS6hkoe

Last week, several man o’ wars were found on a Sullivan Island beach and near the Surfside Pier in Myrtle Beach; 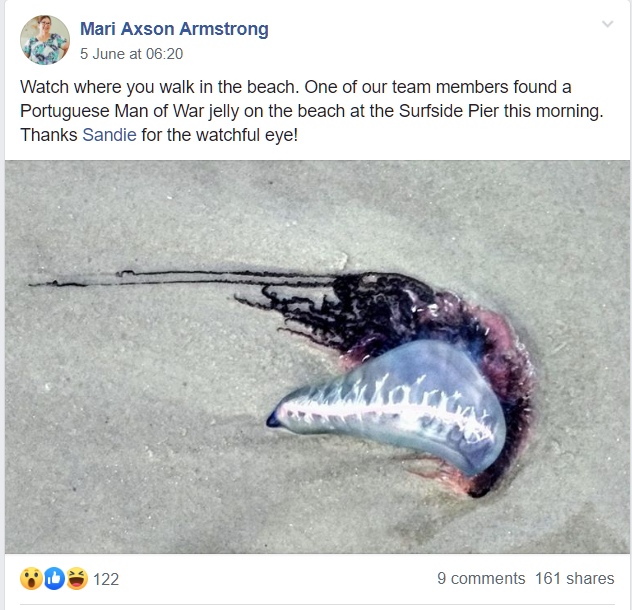 According to a press release from Sullivan’s Island, “This is the first man o’ war which has been identified on our beach. Last week there were reports of Portuguese man o’ war at beaches in Northern Georgia and Southern South Carolina.”

According to National Geographic, “The tentacles contain batteries of cells that house miniscule, hollow harpoons called nematocysts. Those barbed harpoons act like hypodermic needles, enabling the man-of-war to inject a potent mix of venom into a victim.”

The Portuguese Man o’ War is one of the most dangerous jellyfish in the world with 100ft long tentacles. pic.twitter.com/REn7zYTE9E

Last summer, there was a wave of man o’ war stings in South Carolina, causing hundreds of hospitalizations and closing several beaches.

If you’re planning on visiting a Carolina beach over the next few weeks, officials are now advising beachgoers to carry jellyfish sting ointment with them in case of stings.

If you spot a Man ‘O War jellyfish, please contact the lifeguard or local police.