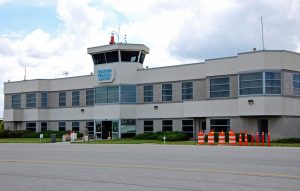 Concord’s new $12.3 million terminal and parking deck expansions at the regional airport will not only be bringing new passengers, but also new business partnerships.

Allegiant Air and NASCAR just announced a multi-year agreement that will create a first-ever “official Passenger Airline Partner” for the company. This will allow NASCAR fans that fly Allegiant to enjoy huge discounts on flights to over 20 NASCAR race markets, including Las Vegas, Phoenix, and LA.

Concord Regional Airport Director Rick Cloutier briefly mentioned the new partnership in a recent press release; “That affects us on a whole, it doesn’t necessarily affect us for additional operations, but since we are NASCAR’s airport so to speak, the partnership with Allegiant/NASCAR will help grow our service in the future to different destinations that we might not of had before. “Without giving out any confidential information, that’s about the best answer I can give you. I have a meeting with Allegiant next week and then that’s the time we actually solidify destinations and increased service for the following upcoming year, so hopefully by the end of the month we should have a pretty definitive answer on how much increase we’ll have.”

The airport’s new 30,000-square-foot terminal and 652-space parking deck will separate commercial operations from general aviation operations and bring the airport closer to being able to directly compete with the Charlotte Douglas International Airport. 95% of the $6.7 million terminal will be paid for with state and federal funding. The majority of the $5.6 million parking deck will be paid for with loans that the city hopes to pay back using parking fees.

What do you think of the expansion and new partnership?