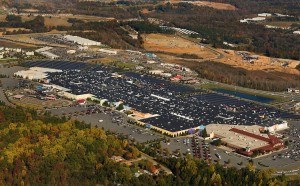 The Concord community is now mourning the loss of one of their Police Officers after a deadly shootout late last night near Concord Mills.

According to police, a call came in at 10:18pm regarding a crashed vehicle on I-85 near Bruton Smith Blvd. An ALE agent and a CPD officer were investigating the crash when a woman approached and told them that a man had tried to take her vehicle near the Sonic Drive-In.

The ALE agent and 2 other CPD officers then drove to the Sonic and spotted a man who matched the woman’s description and approached him. The suspect then pulled out a handgun and shot both CPD officers.

2 more CPD officers then arrived on the scene and saw the suspect get into an SUV. As they approached the vehicle, there was an exchange of gunfire and the suspect was shot and killed.

Currently on the scene of an officer involved shooting on Gateway Lane near Speedway Blvd. More information to follow as soon as available. Avoid the area. /kee pic.twitter.com/Nn6QuQtBYa

Early this morning, the Concord Police released a statement saying that a CPD officer had lost his life in the shooting:

“With a heavy heart, we confirm that two Concord Police Officers were involved in an incident resulting in the tragic loss of a CPD officer. The second officer was transported to the hospital with non-life-threatening injuries. The subject involved was armed and is deceased. CPD will release more information in the form of a formal conference Thursday morning.

This loss is devastating not only to the member’s family and loved ones but every police officer across the city, state, and country.

Please join us by praying for all involved.

Memorials can be placed at CPD Headquarters at the corner of Cabarrus and Spring St.”

1/3 With a heavy heart, we confirm that two Concord Police Officers were involved in an incident resulting in the tragic loss of a CPD officer. The second officer was transported to the hospital with non-life-threatening injuries. pic.twitter.com/h10AGgpDRN

The suspect also died in the shooting.

The SBI is now investigating the incident.

No names have yet been released.

We will update this article as more information comes out.