You may want to check your old junk boxes to see if you have any old Blockbuster tapes laying around. James Meyers Jr., a single dad from Concord was just arrested for failing to return a movie that he rented in 2002.

James was driving his 10-year-old daughter to school on Tuesday morning when police pulled him over for a broken brake light. 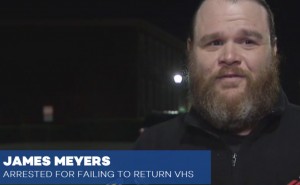 He politely gave the police his driver’s license – when they returned, they said there was a warrant out for his arrest for not returning a VHS rental, “Freddy Got Fingered,” from 2002.

Police then let him drive his daughter to school if he promised to return to the police station to be arrested. He did return, was processed at the Concord Police Department on a charge of “failure to return hired property”, then transferred to Cabarrus County Jail, where he was released on a written promise.

James Meyers is now scheduled to appear in court next month.