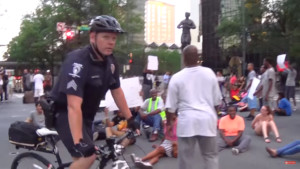 CMPD is about to step up police protection in the wake of one of the deadliest police shootings in recent history. Charlotte Police Chief Kerr Putney commented in a recent press release that the department is about to implement some new “strategies” to keep police and our citizens safer.

In the post-Kendrick Trial #BlackLivesMatter protests through Uptown Charlotte, officers used bikes to guide protesters, but they never wore full body armor. Full armor was only used on the more highly trained shield units that were called into duty only when a heavy threat was perceived – such as the Friday night of the Kendrick trial protests when things started to get more heated.

During the recent police shootings in Dallas, the officers watching over the demonstration were not wearing full body armor as the crowd did not appear hostile.

The new CMPD policies hope to now minimize any risk, even during peaceful protests by ensuring officers always have some sort of armor on. “We have some strategies that we are going to use to ensure our own safety,” chief Putney commented, stopping short of giving specific details, noting that, “I’m not going to discuss that because people use everything we say against us, and tragically, that is what happened in Dallas.”

He seemed to indicate that not only will there be more body armor on all crowd control police, but there will also be more police in general at all future rallies. “We are going to take care of ourselves as we take care of our public,” he said.

Here is a video of the Kendrick Trial protests in Uptown Charlotte: