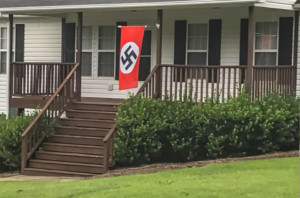 After several people posted a picture of a Nazi flag being flown outside of a Mt. Holly house, one Charlotte woman decided to investigate for herself.

Page Braswell researched the location of the home online, drove to the Mount Holly neighborhood, and started recording a cellphone video as she approached the white house on the corner of Forestway Drive.

Joe Love, the owner of the home, became furious when she started questioning him about the flag, “I’m not a Nazi…this is Nazi f***ing America.”

Here is the full cell phone video from Page Braswell, which has now been viewed over 200,000 times and shared over 4,000 times (WARNING: Graphic Language);

According to the Gaston Gazette, Love first started flying his Nazi flag earlier this month after his other confederate flags were stolen.

“I put three different flags out here, which were all Confederate flags,” he said. “Every one of them got stolen. I put this one up, nobody wants it.”

He noted that the swastika symbol “used to be a religious symbol in India until Hitler got ahold of it. A lot of people don’t know that… I agree with the symbol as it started out as a religious symbol. But as far as backing Hitler and being a white supremacist and Hitler, I’m not into that.”

He also said that it’s his freedom to fly whatever flag he wants. “A lot of folks died to give me the right to do what I want to do. We don’t support our veterans enough.”

He promised to replace the Nazi flag with another Confederate flag today, as long as it’ll “make the world a better place.”