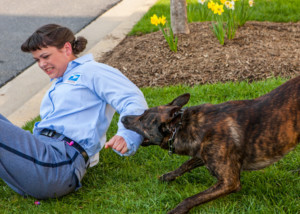 The US Postal Service just released last year’s figures for mail carrier dog attacks, and Charlotte ranked among the top 20 cities in America.

The Queen City came in at #14 on the list, tied with Philadelphia and Minneapolis with a total of 27 attacks that required medical attention last year (down from 33 attacks in 2016). The top five cities were Houston, Los Angeles, St. Louis, Cleveland and San Diego.

“We’re encouraged by the decrease in dog attacks,” said U.S. Postal Service Safety Director Linda DeCarlo in San Diego, where postal employees suffered 46 attacks — the fifth-ranked city in 2017. “The totals are still too high, but we’re confident that with continuing education and dog bite prevention training, along with advancing technology, we can keep more people safe and keep attacks trending downward.”

The US postal service releases the dog-attack numbers as part of Dog Bite Prevention Week, along with some advice on how people can keep their dogs from biting letter carriers.

Some of the top tips included;

The statement by the Postal Service also noted that it places the safety of its employees as a top priority – if a letter carrier feels threatened by a dog, or if a dog is loose or unleashed, they will not hesitate to ask the homeowners to pick up mail at a post office until they can prove the pet has been restrained. In light of the continued increase in attacks, many mail carriers have even started carrying protective dog spray.

What do you think should be done about this growing problem?