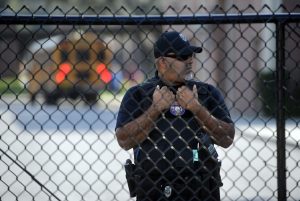 Deportation is imminent for 44-year-old Kelvin Silva, a long-time resident and valued community member of Charlotte. Attorneys say Silva, who is currently in the custody of Immigration and Customs Enforcement (ICE) at the Stewart Detention Center in Lumpkin, Ga., faces deportation to the Dominican Republic, a country that is unfamiliar to him and where Silva will likely find himself homeless and thousands of miles away from family or relatives.

Attorneys are racing to halt ICE’s planned deportation of Silva so that his case can be heard before a federal court.  Although the Child Citizenship Act of 2001, or CCA, replaced the citizenship statute at issue with a new version of the law that omits the racially discriminatory Guyer rule, the CCA was not given retroactive effect. Under the CCA, Silva and many other similarly situated Black immigrants who have resided permanently and lawfully in the U.S. for decades would be recognized as U.S. citizens.

“I’m asking for a chance to stay with my family,” said Kelvin Silva on Thursday afternoon.  “That’s who I am fighting this case for. My family, and for other families like mine, other people like me. I have taken responsibility for my choices and served my sentence. All I want is to be with my family. If I’m deported, I don’t know when or if I will see them again.”

When Silva was 11 years old, his father brought him to the U.S. from the Dominican Republic. His father died six years later and Silva eventually fell victim to the U.S. criminal justice system. He has been fighting his deportation case for years from within ICE custody, hoping his claims of citizenship and the unconstitutional discrimination against him and his father would eventually be heard.

The Guyer Rule, first codified in the Nationality Act of 1940, prevented U.S. citizen fathers from passing citizenship to children who were born out of wedlock. The rule disproportionately restricted how non-white parents could secure citizenship for their children – and for decades was maintained for just that reason. The immigration judge in Silva’s case held that because Kelvin’s parents never legally married, they could not have achieved a “legal separation,” and therefore, Silva did not automatically derive U.S. citizenship through his father. Silva and advocates plan to challenge the decision on constitutional grounds.

Silva’s attorneys with the Southern Poverty Law Center (SPLC) and the National Immigration Project of the National Lawyers Guild (NIPNLG) say that Silva would be a free man at home with his family and recognized as a U.S. citizen if it weren’t for this policy.

“My brother, Kelvin, has been here since he was 11. Our entire family is here. He has no one in the Dominican Republic,” said Jasmine Pena, Silva’s sister. “He’s a great father and an amazing brother. Don’t take him away from us. We have not seen him in over 11 years, and this will just break us even more, knowing that he would be all alone in a country where he knows almost no one.”

Silva may not ever have his fair day in court if ICE proceeds with the planned deportation, say advocates, who are also urging Kelvin’s community to call on ICE and their elected officials to halt the unjust deportation that could occur within the next 24 hours.

Silva, who has chronic asthma, is at heightened risk of COVID-19 complications, which is exacerbated from prolonged detention and impending travel.