Since the brewery craze started in Charlotte in the early 2000s, people have been bringing their pups with them without a second thought, but this was never actually legal, according to health officials.

This past Friday, Three Spirits Brewery posted some sad news to their patrons: 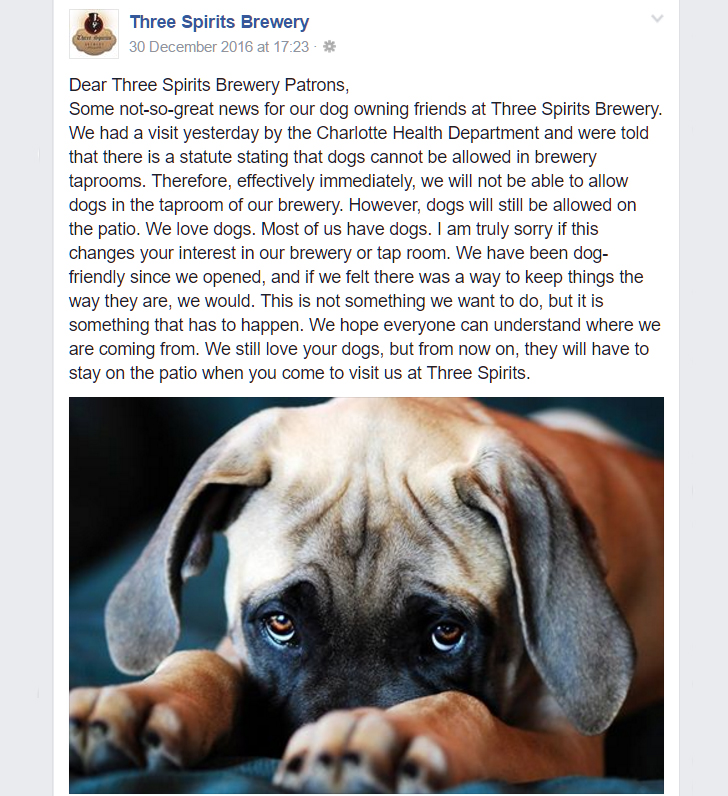 “Some not-so-great news for our dog owning friends at Three Spirits Brewery…effective immediately, we will not be able to allow dogs in the taproom of our brewery. … We still love your dogs, but from now on, they will have to stay on the patio when you come to visit us at Three Spirits,” their post states.

Although most breweries in Charlotte have regularly welcomed dogs, health officials are now speaking up and reminding everyone that taprooms are bound by the same food service codes as restaurants, meaning no dogs are allowed.

In a recent statement, the Mecklenburg County Health Department confirmed that even though breweries may use food trucks, they still wash, rinse and sanitize glassware, and are therefore bound by the same codes as restaurants.

According to Section 6-501.115 on page 178 of the North Carolina Food Code Manual, dogs “may not be allowed on the premises of a food establishment…” unless:

“This unfitting regulation hurts non-food-serving breweries and taprooms. Breweries have filled a void in the lives of individuals across generations, social class, gender, and race serving as a place of gathering, a place of relaxation and recreation, and a place of friendship.

This petition simply asks to lift the regulation barring animals inside the premises of non-food-serving taprooms, and to be enforced at the discretion of taproom management.”

Do you think dogs should be allowed inside taprooms?

Let us know what you think in the comments below!