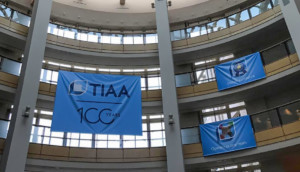 Financial Service Provider TIAA, with its largest employment hub here in Charlotte, is commemorating their 100th anniversary by giving away $1 million dollars in grants to 100 individuals in the nonprofit world.

TIAA was first launched on March 5th, 1918 with a $1 million grant from the Carnegie Corporation of New York to help give financial security to educators through retirement investment accounts.

Today, TIAA honors their beginning by launching the new TIAA Difference Maker 100 program. Those recognized will each receive $10,000 for the nonprofit where they are working to create a better world.

We’re donating $1 million in the names of 100 Difference Makers who work for nonprofits.

To be considered for the program, individuals are invited to submit their own story or recommend a Difference Maker at TIAAdifferencemaker100.org. Submissions will be reviewed based on a variety of criteria including impact, creativity, perseverance and motive, and will be featured in a gallery on the TIAA Difference Maker program hub. The 100 Difference Makers selected will be announced in October 2018.

“For 100 years, TIAA has been a pioneer in working to protect and advance educators and nonprofit professionals’ financial well-being,” said Roger W. Ferguson, Jr. president and CEO of TIAA. “As a mission-driven company, we have a strong commitment to helping these dedicated individuals achieve their financial goals and build financial security so they can focus on the people and communities they serve. The TIAA Difference Maker 100 is about celebrating these extraordinary people who, like TIAA, are inspired to make a positive contribution to the world.”

New York-based TIAA first opened their Charlotte campus in 2001, which now has over 3,000 employees, making it the organization’s official employee hub, and their largest regional headquarters.