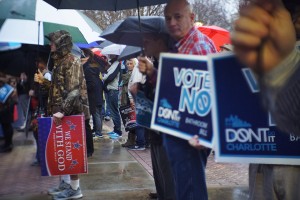 Hundreds of Charlotte citizens gathered in the rain starting at 5pm to rally against the new LGBT ordinance. At 7pm the official meeting began as the city counsel heard arguments from 140 people (most speaking in opposition to the new bill).

Before the meeting, over 21,000 petition signatures were collected against the bill, and about 300 were collected in support of the bill. At about 10:15pm on Monday night, the city council voted 7-4 to pass the new LGBT ordinance, along with the highly controversial ‘bathroom bill’.

The new ordinance will add marital status, familial status, sexual orientation, gender identity, and gender expression to the list of protected characteristics in the commercial non-discrimination, public accommodations, and passenger vehicles for hire laws. Similar laws in other states have resulted in small businesses being shut down when they refused to participate in LGBT activities, including; a gift shop in Iowa, a bakery in Oregon, a florist in Washington, a photography studio in New Mexico, a t-shirt manufacturer in Kentucky, and several others.

In addition, this new ordinance’s ‘bathroom bill’ clause will allow men to use women’s restrooms, locker rooms, and shower facility (and vice-versa), based on their current “gender identity”.

Similar ‘bathroom bills’ have passed in Toronto and Seattle, and both cities have already begun to see negative consequences. In Toronto, a man claiming to be transgender was arrested for sexually assaulting women in two local women’s shower facilities, and in Seattle, a man recently undressed and refused to leave a women’s locker room, citing their new bathroom bill.

It is now likely that the North Carolina General Assembly will attempt to nullify tonight’s decision by the city counsil.