Local meteorologists are now thinking that low-reaching meteors could be the cause of the recent ‘booms’ that Mount Holly residents have been hearing. One of those fireball meteors lit up the sky early Wednesday morning and was caught on film in Huntersville.

Rob Swanson recorded the entire event on his outdoor security camera last night at around 4 a.m.:

The fireball meteor was also seen in several surrounding states. The American Meteor Society has already received 25 reports of last night’s fireball. “The fireball was seen primarily from North and South Carolina but witnesses from Virginia, Tennessee, Kentucky and Maryland also reported the event.” 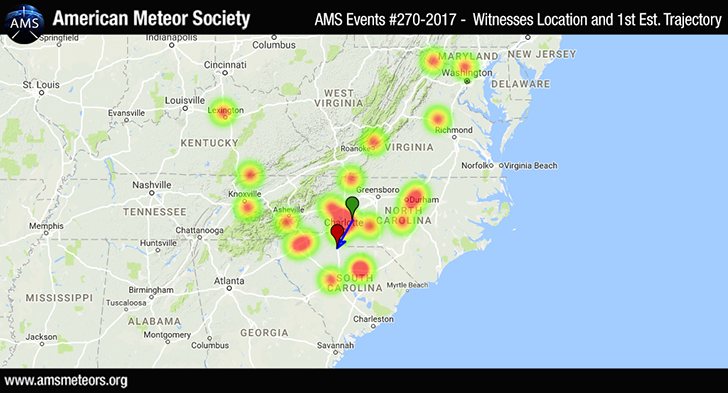 According to AMS, “The preliminary estimated trajectory plotted from the witness reports shows the meteor was traveling from the Northeast to the Southwest and ended its flight south of Rock Hill, South Carolina.”

Local meteorologist Brad Panovich noted that meteors aren’t that uncommon, but fact that it was very low in the sky and the amount of time it was seen is what makes last night’s sighting it unique.

He also noted that it most likely caused a loud boom last night, and could have been the cause of recent unexplained booms heard in Mount Holly. “If it got that low we would have heard a boom or explosion as it got lower in the atmosphere.”

Another massive meteor was captured on film by a local Charlotte resident just this past September – how many more may have fallen since then that may not have been spotted?

Mount Holly residents have been asking a lot of questions recently about several loud booms that started over a week ago. The Mount Holly police chief was able to attributed one of the booms to a train rolling through town, and another as a high-atmospheric weather event.

But there was no explanation for a loud boom reported Jan. 17 – a boom so loud that it rattled several houses and caused over 30 residents to call 911.

This Russian Youtube shows how loud a low-flying meteor can be:

Do you think the Mount Holly ‘boom’ heard on January 17th, was a large meteor?