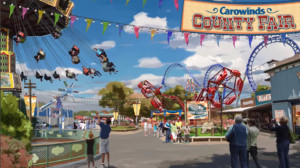 Carowinds is about to bring back the 50s with it’s brand new ‘Carolina County Fair’.

Opening in the Spring of 2017, the new section will offer four vintage fair rides, as well as new foods, landscaping, and events.

The new theme park section is being built in partnership with Cedar Fair Entertainment Co., who want to bring back old antique rides from Europe and the United States to theme parks all across the country.

Here’s a preview of what the new Carowinds section will look like:

Carowinds will also be starting a new tradition called ‘WinterFest’, which will include a 70-foot-tall Christmas tree, Christmas crafts, food, music, and other events to the theme park. (including Ice skating on Snowflake Lake).

The Carolina’s biggest theme park also just completed their recent $50 million expansion, which included the new Carolina Harbor waterpark, as well as the new Fury coaster – which is now the tallest and fastest giga coaster in the world.

What do you think of Carowind’s new additions?