Most medical marijuana programs in states across the U.S. list a number of conditions that qualify a patient for a license to buy and/or grow weed to keep their symptoms under control. Though more study is warranted to better understand the short- and long-term effects of cannabis on the body and mind, it seems that cannabis is more or less officially accepted as a medical treatment, even for serious conditions like epilepsy, HIV, Crohn’s disease, Alzheimer’s disease and PTSD. In fact, it is incredibly common to see “cancer” listed among these conditions.

Yet, is cancer really treatable with medical marijuana? If so, why isn’t the drug touted as a miracle cure, and if not, why are cancer patients allowed to use marijuana when their treatment is already so touch-and-go?

What Cannabis Does for Cancer Patients

For the most part, cancer patients to seek medical marijuana treatment aren’t doing so expecting the sticky green herb to eradicate their body of tumors. Instead, cancer patients tend to be given medical marijuana licenses thanks to the difficulty associated with modern cancer treatment — specifically, chemotherapy. Chemo is essentially poisoning the entire body in the hopes that cancer cells die faster than a patient’s normal cells. As one might expect, this poisoning comes with myriad unpleasant side effects, such as fatigue, lack of focus, fertility problems, numbness and weight changes.

One of the most visible and least tolerable is a change to patients’ digestion, causing extreme nausea, constipation, diarrhea and drastic changes in appetite. Because many chemo patients receive such negative reactions from food, many opt not to eat, which can further compromise their health.

Enter: marijuana. The cannabinoid THC is known to stimulate appetite and suppress negative digestive issues, like nausea, by binding to receptors throughout the digestive system. By masking the digestion-related symptoms of chemotherapy, marijuana allows cancer patients to eat more nutritious foods throughout their treatment. Plus, THC, CBD and other cannabinoids also work to reverse inflammation and reduce aches and pains that can develop as a result of chemo. This helps improve cancer patients’ health and give them greater comfort and better outcomes.

Currently, when a cancer patient visits a Michigan marijuana dispensary, they are doing so to help mitigate the downsides of chemotherapy. However, there is a growing body of research that indicates cannabis could be the basis for an even better cancer-fighting strategy. 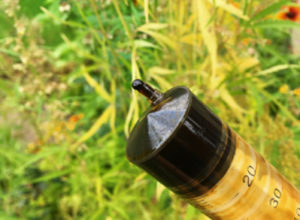 There are numerous cell cultures and animal models that demonstrate THC acting against some cancers, limiting or completely halting their growth. These studies convinced Canadian engineer Rick Simpson to use THC in his battle against skin cancer. Simpson created an incredibly concentrated oil, now called Rick Simpson Oil, which he applied directly to his cancerous growths. After a number of days, the cancer was gone — according to Simpson, who went on to sell his special cannabis oil blends. Additionally, there are some ongoing clinical trials that suggest using marijuana is an effective treatment against a particularly vicious form of brain cancer without the side effects of chemotherapy, radiation or surgery.

Still, doctors are hesitant to prescribe marijuana for this or any other cancer — simply because we don’t always know how the cancer will behave, how THC and CBD will interact with other treatment efforts and whether the added expense is worthwhile for patients. In fact, while THC acts against some cancers, it actively encourages the growth of others. What’s more, the availability of alternative treatments can delay a patient’s choice to partake in conventional treatments, resulting in worse outcomes. Until science can understand when marijuana is helpful and when it hurts, it isn’t advisable to rely only on cannabis for cancer treatment.

Cancer is a serious disease that science has yet to fully understand. Similarly, cannabis is a potentially powerful drug that might function as effective treatment for dozens of conditions — if only we knew more about how the drug works. As yet, research cannot confirm that marijuana is an effective cancer treatment; we only know that some cannabinoids can be useful in combatting the effects of existing cancer treatment. Still, with further research, doctors might be prescribing cannabis cures in decades to come.