Earlier this morning the Cabarrus County School administrators made the decision to evacuate every high school in the county.

Officials have not yet released details about what the threat was, but they do not want to take any chances.

According to the Concord police department, they are coordinating the investigation alongside the Cabarrus County Sheriff’s Office;

CPD & CCSO jointly investigating threat to Cabarrus High Schools. Not a credible threat out of but abundance of caution schools are closing

This is a coordinated decision between law enforcement and school system. No further comment at this time. – Chief Gacek

So far, the following schools have been evacuated:

According to Fox 46, several students were told that there was a bomb threat;

Student at Jay M. Robinson High School says at first students were told was a bomb threat, taken to football stadium and then told school was closed for day. @ConcordNCPolice say there was a non-credible threat to @CabCoSchools all high schools closed out of abundance of caution pic.twitter.com/k8rlAWr3FI

About a half-hour ago, a bomb-squad vehicle arrived at Hickory Ridge High School;

This is a developing story.

The city of Concord just sent out the following press release; 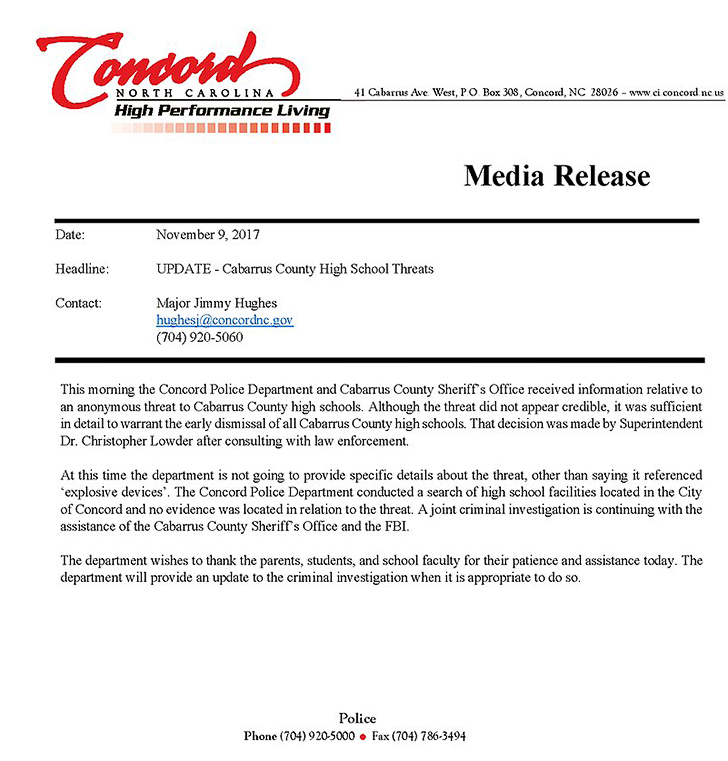