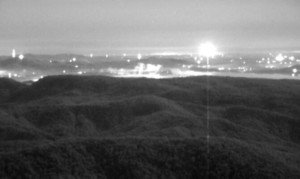 The Brown Mountain Lights are legendary UFOs (unidentified flying objects) in the North Carolina mountains. They’ve appeared to thousands of people over the past 100 years, yet like most UFOs, the Brown Mountain Lights are anything but predictable. App State physicist Daniel Caton and his team almost gave up after attempting to film the lights over the past few years.

Earlier this year, their dry spell ended and the lights finally appeared on his camera in vivid fashion.

Here is his video description, with the time stamps of the appearances, and his raw, unedited footage:

To get the above footage, Daniel Caton and his App State scientific team set up two cameras on a house overlooking the Brown Mountains and wirelessly streamed the footage to their lab back at Appalachian State University. For the past 4 years, they reviewed the footage every day from the previous night without seeing anything that couldn’t be easily explained (shooting stars, car lights, camera flares, etc). If something shows up on one camera but not the other, the team assumes they just saw a lens flare or some other electronic anomaly.

The footage above, for the first time, captured the same strange lights on both film cameras, at the same exact time.

After the discovery, Caton and his colleagues dissected the images and couldn’t come up with any logical explanation for the light to be there.

If you’ve never heard of the ‘Brown Mountain Lights’ before, this short (fairly dated) documentary presents a decent overview:

What do you think the Brown Mountain Lights might be?