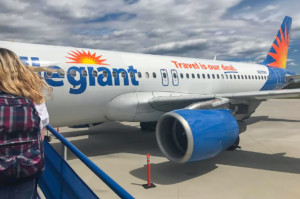 Allegiant Air has just announced plans to invest $50 million into the Concord Airport to make it their latest national hub. The new hub will create at least 66 high-paying jobs and will add two new permanent Airbus aircraft.

“We’re excited about making Concord a permanent base, and further establishing Allegiant as a hometown airline for this high-performance city,” said Keith Hansen, Allegiant’s vice president of government affairs. “With a growing and diverse population seeking affordable vacation travel, and as a regional destination for race enthusiasts, arts fans and more, Concord is an ideal location for an Allegiant base. Having locally-based operations will mean opportunities for expanded hours, as well as more – and more frequent – flight offerings for residents and visitors alike.”

Both the Concord City Council and Cabarrus County Commissioners approved three-year economic development grants for the expansion. Based on a portion of the increased tax investment, the grant amount from the City of Concord would not exceed $48,649 and $75,001 from Cabarrus County.

“Since Allegiant’s first flight from Concord-Padgett Regional Airport in 2013, their growth has been truly remarkable,” said Concord Mayor Bill Dusch. “We are very pleased that Allegiant has selected Concord for a new base of operations, which brings new jobs and travel opportunities for the citizens of Concord and the Charlotte region. We look forward to continue developing our partnership with Allegiant in the future.”

The company plans to grow capacity by double-digits including the addition of Boston Logan (BOS), Chicago Midway (MDW) and Houston Hobby (HOU) to its national route map.