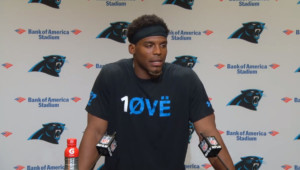 After suffering 6 grueling defeats, the Panthers have now decided to bench Cam Newtown for the last 2 games of the regular season.

The move is likely due to Cam’s continued shoulder issues. In 2017, he had surgery to repair a partially torn right rotator cuff from an injury in 2016 and his shoulder has had continued issues ever since.

Sources: #Panthers are expected to sit Cam Newton (shoulder) now that they are out of the playoff race and Taylor Heinicke is believed to be starting Sunday vs. the #Falcons. A move that makes a lot of sense. … Cam is not practicing today.

Ian, however, is incorrect in saying that we are “out of the playoff race”.

If the Vikings lose their next 2 games (to the Lions (5-9) and Bears (10-4)), and the Panthers win their next 2 games (to the Saints (12-2) and Falcons (5-9)), and the Eagles and Redskins both lose next week’s game and the Eagles beat the Redskins in their final game, it would give both the Panthers and Eagles an 8-8 record, tied for 6th, and since we beat the Eagles on 10/21, we would end up making to the playoffs.

The Panthers’ backup Taylor Heinicke will likely start the 2 remaining games in the Panthers regular season. It’s unknown whether or not Cam would return if the Panthers were to make it to the playoffs.