A $75,000 reward is now being offered to anyone who can provide information leading to the arrest of the individual or individuals responsible for this past Saturday night’s attack on 2 Moore County electrical substations.

NC Governor Cooper made the announcement yesterday, saying that the $75,000 reward is being offered in 3 parts by the State of NC, Duke Energy, and Moore County.

“An attack on our critical infrastructure will not be tolerated,” said Governor Cooper in a press release. “I appreciate the coordinated efforts of law enforcement to leave no stone unturned in finding the criminals who did this and I thank Moore County and Duke Energy for matching the state’s reward for information leading to the arrest and conviction of those responsible.”

Gov. Cooper, Duke Energy and Moore County joined together to announce a reward of up to $75,000 for information leading to the conviction of those responsible for the destruction of substations in Moore County. If you have information, call (910) 947-4444.https://t.co/3gJjfaxvSH pic.twitter.com/4wcVnib5Ig

The FBI also issued the following wanted poster regarding the search for the attackers: The shooting occurred around 7pm on Saturday night (12/3) around Southern Pines, NC (about an 1 1/2 hours east of Charlotte), knocking out the power to over 40,000 residents.

The timing and location of the attacks seem to surround a highly controversial “Drag Show” that was scheduled to take place at 7pm at the Sunrise Theater in Downtown Southern Pines, NC.

Here is the location of the Drag Show:

Here is the power outage map from Duke Energy: 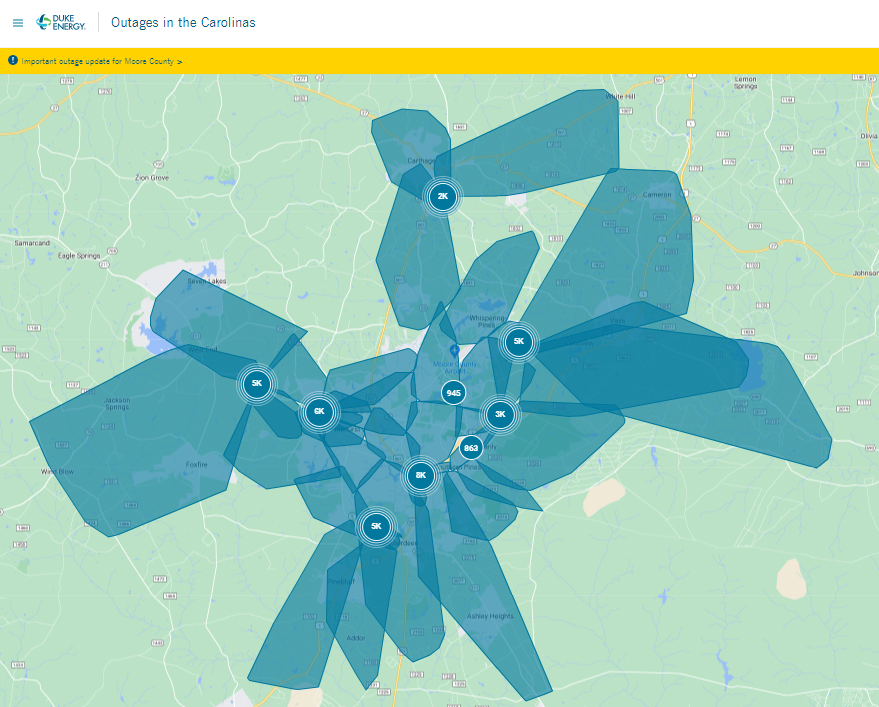 Early this morning the Moore County Sheriff’s Department visited the home of Emily Moore, the director of ‘Moore County Citizens for Freedom’ group, who posted “The power is out in Moore County and I know why.”

Minutes later she also posted a picture of the lights out at the Sunrise Theater with the caption, “God will not be mocked”.

About 2 hours later, the police came to her home. She then posted the following message on Facebook:

“The Moore County Sheriff’s Office just checked in. I welcomed them to my home.

Sorry they wasted their time. I told them that God works in mysterious ways and is responsible for the outage. I used the opportunity to tell them about the immoral drag show and the blasphemies screamed by its supporters.

God is chastising Moore County. I thanked them for coming and wished them a good night. Thankful for the LEOs service, as always.”

Republican State Delegate Sarah Fields also initially posted seeming support of the attack, using the hashtags #ProtectChildren and #ImOKWithIt in reference to the attack (she soon removed the #ImOKWithIT hashtag after making the post):

This person posted a tweet appearing to endorse the firearms attack on the substations, then edited the tweet to remove an approving hashtag. pic.twitter.com/pjph5do8fE

Anyone having information concerning this case should contact the Moore County Sheriff’s Office at (910) 947-4444, or the Federal Bureau of Investigation at 1-800-CALL FBI.