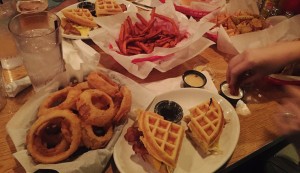 The food we eat plays a much deeper role than simply giving us the strength and energy to oversee various day-to-day tasks. It also has a direct impact on our level of immunity, the condition of our hair and, recently, the flawlessness of our complexion. Which, of course, explains the necessity of being incredibly selective with what you put into your eating routine if you want to have and hold on to a glowing skin. And considering how frustrating acne scar removal can be once the pimples set in, you may want to pay more attention to this.

Why Do Some Foods Cause Body Acne?

You probably already know that your body’s largest organ is made up of a combination of proteins, fats and water. What you, however, may not be aware of is the finely-tuned balance system that controls the state of your complexion and the appearance of your skin. Throw this system out of sync even for a bit, either through a hormonal spike or sharply varying pH levels, and pimples start to break out. Now, some of the foods discussed below are notorious at altering the body’s hormonal, pH or blood sugar levels, consequently precipitating a full-scale breakout. And some of these pimples and blisters can get so bad that even simple acne spot treatments may not come to your aid.

1. The Link Between Dairy Goods and Whiteheads

Milk and dairy products are renowned for causing breakouts where previously flawless skin existed. In this bracket you will also find milk by products such as yoghurt, cheese, ice cream, butter, ghee and casein. Surprisingly, this is not even related to being lactose intolerant, contrary to what you could assume. The impact is felt even by perfectly lactose tolerant individuals.

Experts believe that milk and products derived from dairy contain a high concentration of bovine hormones that tend to remain active long after ingestion and digestion. These hormones will then interfere with the homeostatic balance of the body’s endocrine system and  trigger a breakout or worsen an already existing skin problem. Besides this, dairy milk contains a peculiar type of amino acid that is thought to provoke the liver into secreting the infamous IGF-1 hormone associated with pimples and zits.

As if this is not enough, sugarly dairy products like sweetened ice creams are believed to trigger a spike in your insulin levels which affects how effectively your body controls your blood sugar levels. Such spikes are thought to contribute immensely to skin inflammation and later pimples.

2. The Relationship Between Papules and Processed Foods

Overly refined and processed foods are not exactly strangers when it comes to their injurious impact to a person’s health. Granted they may be tasty, tempting and devilishly delicious to some extent, but the long-term impact that they have on a person’s endocrine and hormonal profile leaves a lot to be desired. Part of the reason is because most fast foods and refined goods have a dangerously high glycemic load. Our bodies are not naturally evolved to handle such a sudden intake of high glycemic index foods without going completely bonkers, at least internally. This often results in a myriad of homeostatic corrections in an attempt to rebalance the system that eventually culminates in breakouts. You may want to go easy on the pizza, hamburgers, burgers and french-fries next time you are eating out.

You probably already know that there is good and bad cholesterol – the culprit here as far as spending on scar removers is concerned is the bad type of cholesterol. Which, unfortunately, defines a huge chunk of the standard American diet.

There are several ways in which cholesterol laden foods that we all love to indulge in as guilty-pleasures are massively detrimental to our complexion. For starters, cholesterol has been severally linked to an increased production of androgens. These are the same hormones that were responsible for the angry-looking lesions and zits that plagued your teenage and early adulthood years. Androgens are also a huge predisposing factor for cystic acne that leaves unsightly scars in the aftermath.

Secondly, greasy foods are believed to alter one’s overall lipid profile. You see, unlike other food groups such as fruits, meat and whole grains, our ancestors did not really develop an effective digestive and assimilation mechanism to handle the high-cholesterol load of fast foods. In other words, since the body cannot handle the sudden injection of a substance which was considered a rarity several millennia ago, it attempts to increase your hepatic lipase activity in an  attempt to store the triglycerides for leaner times.

The problem is that if you keep consuming fast foods regularly the body starts to run out of lipase stores to shelve these extra triglycerides and thus resorts to laying them in the dermis. And as you would expect, nasty breakouts always follow.

Lastly, almost all cholesterol-laden and greasy foods have a naturally high glycemic load and very low fibre content (if any). And this means that the assimilation and digestion of such food groups throws your body’s blood sugar control system off balance. Again, acne lesions (or if you’re lucky a few pimples) is the price that your complexion pays for your poor food choices.

It may come as a surprise that chocolate has somehow found its way into this not-so-glamorous list of foods that can cause acne. However, there is no shortage of scientifically-proven reasons why chocolate has a bad rap for being one of the snacks responsible for your bad skin. For one, your favorite candy bar contains a significant percentage of dairy and sugar premix and only a small amount of cacao. And as we have seen from the pointers above, a combination of sugar and dairy is hardly the best thing for your skin, especially if you are naturally susceptible to acne breakouts.

Secondly, chocolate is one of the high glycemic index foods that the body is not naturally adapted to handle with comparative ease. Therefore, it is best consumed in moderate amounts if you really have to treat yourself to a sweet tooth therapy. Otherwise, for the sake of your complexion, you are better off staying away from sweetened cacao bars.

In the same vein, sugar and sugar-laden snacks are also known to cause acne courtesy of the carnage left behind on our insulin levels after assimilation in the bloodstream.  To put it simply, your body has to work twice as hard to bring your blood sugar levels to an ideal optimum and under control after eating a pound of cake.  And if you happen to do this frequently, the insulin spikes will trigger a unique inflammatory effect that creates an ideal thriving environment for acne-causing bacteria.

Although it is not exactly a ‘food’, the commonality and presence of alcohol in our society warrants its inclusion of this list of foods that can cause acne. That said, alcoholic drinks are hardly saints when it comes to impacting maximum damage on human health particularly when consumed excessively.  We all know this. However, most people are not aware that over-indulging in your favorite drink can also impact your complexion negatively.

First, alcohol is notorious for causing an imbalance in a person’s delicate testosterone-oestrogen levels. This hormonal imbalance has been shown to be pivotal in influencing the severity of frequency of breakouts, especially in people who are susceptible to acne lesions and pimples.

Secondly, frequent and excessive consumption of alcohol is known to trigger a peculiar overproduction of sebum which goes on to block and plug the skin pores. Pair this with poor facial hygiene and you have a full-blown breakout in your hands. Now you know why bad skin days haunt you after spending a couple of nights getting hammered at the bar.

Thirdly, and most importantly, irresponsible consumption habits such as binge drinking wreaks untold havoc on our extremely delicate immune systems. This opens up the body to a slew of pathogens among them colonisation by acne-causing bacteria also known as p.acnes. Last by not least, alcohol consumption is often accompanied by poor food choices and lower self-control when around highly-processed junk food. It is not uncommon, for instance,  to over-indulge in pizza and steamy mouth-watering burgers when you are out for a few beers. This creates a negative feedback loop that culminates in an unhealthy lifestyle that predisposes you unnecessarily to breakouts.

While it may look like all doom and gloom, food is not the enemy here. On the contrary,  it can be the solution to getting that elusive photogenic and gorgeous skin that you desire if you can find a way of eating healthy and nutritious meals. Wise food choices like eating plenty of vegetables, fruit, whole grains and fish (instead of junk and processed foods) can put you well in the course of kicking out flare ups for good.