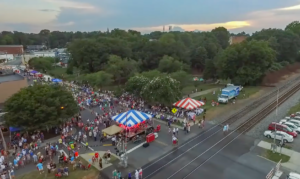 Get ready to dance in the streets again during Belmont’s 2022 Friday Night Live concert series.  The fun kicks off in downtown on April 29th with The Breakfast Club! Bring your family and friends down to Main Street for a fun night full of great music, cold drinks, and lots of dancing!

The 2022 schedule includes six concerts held on various Fridays in April, May, June, and July. The concerts will be held on South Main Street adjacent to Stowe Park from 6:00pm to 10:00pm. The evenings will kick off with the opening of the beverage garden and music provided by local DJs. The featured bands will take the stage at 7:00pm. S. Main Street will be closed beginning at 1:00pm on concert days, so please plan accordingly and don’t forget to bring your best dance moves!

The Downtown Belmont Development Association (DBDA) is thrilled to be bringing back its first full series of concerts since 2019. After the limited concert series in 2021 and the response to other outdoor events last fall, it was clear that the community is excited to have outdoor events back for everyone to enjoy in downtown.

Belmont will kick off its concert series with fan favorite The Breakfast Club on Friday, April 29th.  This concert will not only open the 2022 concert season, but it will also be the start of a weekend full of music, arts, culture, and festivities during Belmont’s annual Garibaldi Festival taking place on Saturday, April 30th.  Staff felt it was important for this festival to come back with a bang after a two-year hiatus.  Belmont has been focused on increasing arts and culture in its community, as demonstrated by the Moonlight on Main event this past fall and thought this was a great opportunity to continue that momentum.

June 10 – Abbey Road, “one of the most musically and visually satisfying Beatle tribute acts in the world”