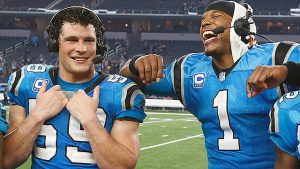 2 of the Carolina Panthers’ most beloved players, Cam Newton and Luke Kuechly have been ranked among the highest paid athletes in the world, according to Forbes.

Cam Newton came in at number 7 in the world and the number 1 highest paid NFL player, earning a total of $53.1 million.

Luke Kuechly also ranked among the top 50 athletes in the world, coming at number 44, earning $27.1 million.

Forbes’ list of the top 100 highest-paid athletes in the world combines salaries, prize money, endorsements, and all bonuses over the past year.

Cam earned an impressive $12 million alone from endorsements – compared with about $1 million for Luke.

A couple NASCAR legends also made the list, including Dale Earnhardt Jr. at number 71 ($23.5 million) and Jimmie Johnson at number 82 ($22.2 million).