Fueled by Cheerwine and fortifying grub from NoDa’s Brooks Sandwhich House, my brother I spent last Friday exploring Charlotte, where I have not lived since I took off for college. Because interstates speed you past all that is intriguing, we took the slow roads. I got re-acquainted with the place where we grew up, got to do a little time traveling, and found a little slice of heaven. 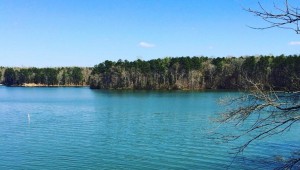 “You ever been there?” John asked, as we drove past the stone walls of Latta Plantation in Huntersville, mid-afternoon. I knew a bit of the history thanks to third-grade at McKee Road, and we once took a field trip to the Carolina Raptor Center at the plantation. But I did not remember seeing the Latta house, so we paid the seven bucks each to enter. James Latta, the Irish emigrant cotton baron who built the place, had a thing for Federal-style city architecture, and the home would fit in on the brick streets of Philadelphia’s Society Hill.

It is always strange to visit an old place once inhabited by long-departed people and so it was in the four rooms of that little mansion. Curiously, the Latta family did their living in the back parlor. The front parlor, larger and well-appointed, was normally sealed off and only used for commemorations of living and dying.

Respect for place and occasion seems an admirable custom. They also had an atrocious custom, slavery. There is at least one slave cabin into which, while hornets buzz about your head, you can peer and reflect on the bizarre brutality. The slave cabin was not constructed with much love. The owners did not bother to make more than one little window hole and there were no openings on the second floor, which must have got damn hot as a result.

Afterward, we drove the winding country rounds that follow the twists of the Catawaba. Along the way, we took in grand riverside vistas, including an Important Bird Area (it’s actually called that) and a couple antebellum homes owned by the Charlotte-Mecklenburg Historic Landmarks Commission, which has done an admirable job preserving our few remaining bits of brick and mortar heritage. The day before was St. Patrick’s Day, and so I was mighty ready to call it an early night at 6 after hours of roving about. But our anti-highway homeward course took us through Uptown. There, Brevard Court at Latta Arcade beckoned us into its narrow brick alley lined with bars and restaurants. It reminded me of a similar space in Dublin called Castle Market, near Grafton Street, a pedestrian lane where you can eat and drink al fresco. But unlike Castle Market, Brevard Court, narrow and closed-in, had a palpable community spirit.

We began at the Belfast Mill, a tiny pub that serves only drinks. The hospitable and engaging bartender ensured everyone was at ease while she selected good tunes and played them at a volume conducive to conversation. I said I was hungry, and she advised I get fish and chips at Valhalla, a gastropub a few doors down and then bring the food back to her bar. So I walked over and placed my order and the girl behind the Valhalla bar said, “Are you taking this to eat at Belfast Mill?”

“Uh, yeah,” I said, sheepishly, worried I was breaking some rule because most places are littered with rules.

There was hospitality, that great old Southern trait, in abundance. Back at Belfast Mill, I enjoyed the fish and chips while drinking Olde Mecklenburg Copper ale, a local brew of course, while darts whizzed about my head. Afterward, my brother and I stepped out into the lively arcade, full of diners and drinkers. We entered another little bar called Hooligans.

The March Madness games were on, and soon I was in conversation with all the others sitting at the long bar. Back and forth, free and easy, people talked about all sorts of things. Connections were made, laughs were had, stories exchanged among natives and newcomers and near-natives. A Davidson alumnus and his girlfriend told great tales, while the barman kept the pints filled. When my brother brought in a gyro in from Nefelie’s, the Greek place across the alley, the bartender handed him a roll of paper towels while everyone commented upon how good the food smelled.

I looked out the window. Five or so old men, wearing fedoras and such, sat around a table outside of Nefelie’s, toasting each other. People of all ages and races were milling around in good cheer.

“This whole alley might be heaven,” I said to the barman. He agreed.

Earlier, the bartender at Belfast Mill had told us that the brick structure housing these pubs was originally a cotton mill. She said the place had many ghost stories, stories which are best conveyed in person over a drink. It struck me later that the same James Latta whose house I had visited mere hours earlier traded his slave-picked cotton right there at Brevard Court. We had inadvertantly traveled his work-journey that afternoon.

The cotton mill could easily have been in ruins or bulldozed for a grand tower, or preserved as a museum like the front parlor of the Latta house. But instead the old place is lived in, improved upon, a lively gathering spot for free people (well, free up to a point: if you carry your drink into the pleasant “parklet” just off the sidewalk you’re liable to get fined or worse as the signs warn).

Heading home, I thought back to a cemetery my brother and I had seen earlier in the day, near the Catawba. The gravestone names — Davidson, Brevard, Latta — were all brought together that evening at the Brevard Court at the Latta Arcade. It is a new gem in Charlotte’s crown, but as I learned, it is also deeply tied to things quite old. You only have to sip slowly, look, and listen. You might even hear the cotton mill’s ghosts telling their tales. Or just ask the bartender about them. Maybe she’ll tell you.

North Carolina Is 2022’s 4th Best State to Drive in