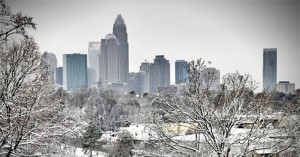 The entire state of North Carolina has just declared a state of emergency in anticipation of tomorrow’s crippling ice and snow storm. The Charlotte region will be hit especially hard with an expected half-inch of ice coming in the morning hours – more than enough to bring down tree limbs and power lines.

Gov. Pat McCrory officially announced the state of emergency this morning saying “We hope they’re wrong, if they’re not wrong, we are going to be prepared.”

The state of emergency will remain in effect for nearly the entire Charlotte region until 7 p.m. on Saturday.

NC Transportation officials are warning people to stay off the roads, even if they have tire chains – other drivers may not be as prepared.

Charlotte DOT crews have been flooding most city streets with salt brine today and will continue to do so throughout the weekend. The city plans on sending out 32 trucks, 64 street maintenance crew members and necessary support staff in 12-hour shifts from 7 a.m. Friday to 7 p.m. Saturday.

Rain, sleet, and snow is expected to start falling tonight, and begin to taper off on Saturday morning.

A low of 30 degrees is forecast for both early Friday and early Saturday and 26 early Sunday and early Monday.

The state of emergency has also caused tomorrow’s Panthers Pride rally to be canceled.

The NC mountains are going to get hit even worse with up to 17 inches are expected in Boone, 13 inches in Asheville, and 13 inches in Hickory through early Saturday.