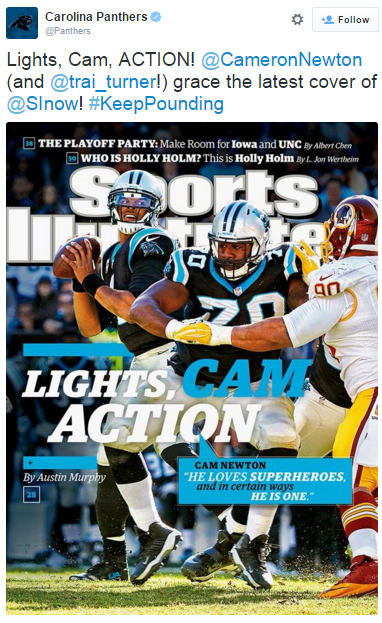 The Carolina Panthers are now one of the most likable teams in America. They have just been featured on the national cover of Sports Illustrated.

The Panthers have surprised the world by becoming only the 16th team in the Super Bowl era to start a season with a 14-0 record. The Panthers are now the only two team with a perfect record this season, and many analysts now consider them to be the best Panthers team in the history of the franchise.

Cam Newton stated in his most recent press conference that it’s an honor to have the fastest growing fan base in the NFL. When asked about the upcoming playoff game, he said that the whole team prepares for every game like it’s their last.

“We know it’s going to be on a national stage, but it’s just another game, it’s all about preparation. Games like this go to the team that is prepared the most and more ready for the moment.” Newton remarked.

Newton and The Panther’s 10-page feature article in Sports Illustrated this week will discuss many of the strengths of the team – especially as it relates to Cam’s “superhero” qualities.