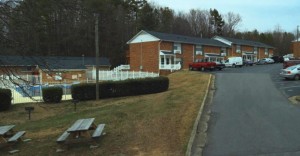 When Gastonia Police were called to a Gastonia Apartment complex on 1110 Pebblestone Way on Tuesday morning they were shocked to discover a naked man running around calling himself ‘God’. When they approached him, the man punched two of them in the head, at which point they tased him to take him into custody.

A woman called 911 at around 8am to report Donald Lee Klinesmith. She said that he was acting very unusual after throwing all of his belongings outside of his unit, then started running around the apartment complex.

“He’s going around and around the pool,” she said.

The woman told the 911 dispatcher that the man had taken off his shirt and was talking to himself.

“Now he’s in there talking to the sign. He might have a little mental problem. I don’t know,” the woman told the operator.

By the time officers arrived, Klinesmith was naked and was referring to himself as ‘God’, according to police.

An officer approached him, and Klinesmith quickly punched the policeman in the head.

A second officer reportedly was punched during the struggle with him, and police say Klinesmith also punched a neighbor.

After police tased Klinesmith and subdued him, he was soon admitted to the hospital. Once released, police will charge the 40-year-old man with assault on a law enforcement officer with serious injury, assault on a government official, and simple assault.