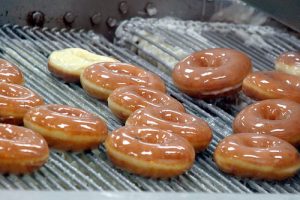 North Carolina’s world famous Krispy Kreme, now with over 1,100 donuts shops around the world, was just bought out by JAB Beech Inc. for a record $1.35 billion.

That price means they’re paying $21 per share, which is a massive 25% premium over it’s Friday closing share price of $16.86.

JAB Beech is a Luxembourg-based hedge fund, which also owns several other international brands, such as; Keurig Green Mountain, Peet’s Coffee & Tea, and Caribou Coffee. The company wanted to take over Krispy Kreme due to its incredible cult-like following and impressive growth perspectives (Krispy Kreme plans on opening at least 150 new donut shops in 2017 alone).

The fund managers have promised that they will allow Krispy Kreme to continue to operate independently from its headquarters in North Carolina.

Krispy Kreme’s board unanimously approved the transaction, which is now set to close in the third quarter.

What do you think of the buy-out?