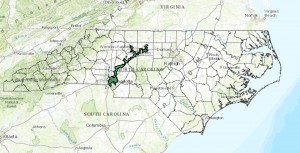 After NC Republicans took over the state legislature in 2010, they drew up new district maps to determine the boundaries of congressional and state legislative districts, carving them up to their partisan advantage.

This past Friday, a federal court declared that two of those congressional districts were gerrymandered in an extremely racially discriminatory manner, deliberately clustering many black voters into large, oddly shaped districts in violation of their constitutional rights.

“Elections should be decided through a contest of issues, not skillful mapmaking. Today, modern computer mapping allows for gerrymandering on steroids, as political mapmakers can easily identify individual registrations on a house-by-house basis, mapping their way to victory.” Judge Max Cogburn wrote in a recent CBS article.

The two very weirdly shaped districts cover diverse areas where aside from race, voters have little in common.

“This ruling by all three judges is a vindication of our challenge to the General Assembly of North Carolina writing racially biased ‘apartheid’ voting districts to disenfranchise the power of the African-American vote,” Rev. William Barber, president of North Carolina’s NAACP chapter, told the Raleigh News & Observer.

In response to this past Friday’s federal ruling, NC leaders have just filed an emergency appeal to overturn the federal court order – arguing that the court’s decision comes too close to the March 15 primary.

Do you think the court order should be overturned?