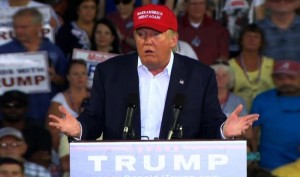 The primary elections for North Carolina are on March 15th and early voting just started yesterday. Donald Trump is now scrambling to build support in the Tar Heel state. He just scheduled a last-minute rally this coming Monday night in Concord, according to his website.

It will be his first of two rallies he now will be doing in North Carolina before the election – the second one will be in Fayetteville on Wednesday night.

Monday night’s rally will take place at the Cabarrus Arena & Events Center, 4751 N.C. 49, Concord. Police and secret service will be shutting down the entire section of the city throughout the morning. Doors will open to the public at 9 am. If you’re a Trump supporter, you can register for a free ticket here. If you don’t like Trump, you may want to bring one of these anti-Trump pieces of flair.

Early voting in North Carolina just started yesterday, and tomorrow, the Trump campaign will even start passing out bumper stickers in Raleigh to announce his new headquarters at 809 Spring Forest Road, Suite 100.