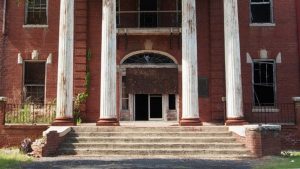 The Stonewall Jackson Juvenile Correctional Facility was originally built in 1907 as the first juvenile detention facility in North Carolina. The institution is located about three miles southwest of downtown Concord, and about 8 miles northeast from the Charlotte city line. It originally encompassing 290 acres, the campus is now 88 acres.

In 1948 as part of continuing statewide efforts to limit “feeblemindedness” and improve the population, the Stonewall Jackson Training School was the site of sterilization by vasectomy of six teenage white males, in operations authorized by the state Eugenics Board. Most sterilizations were performed on girls and women rather than boys or men. North Carolina was one of the last states that continued to perform sterilizations on people under state care.

Part of the grounds still serve as a juvenile detention center (the former Kirk Building currently has 30 active beds for troubled youth), but most of the buildings were abandoned 20 years ago.

These are some of the most stunning images from the old Stonewall Jackson facility (trespassing on the grounds is strictly prohibited);

Was super excited when I released that my delivery route was going to take me past Stonewall Jackson only to arrive and find out that every building is in closed in barb wire gates! Such a bummer!! Glad I got to do lots of exploring here before they closed everything off. #stonewalljackson

Due to the school’s pioneering status and unique features of its early buildings, the Stonewall Jackson Training School Historic District is now listed on the National Register of Historic Places.