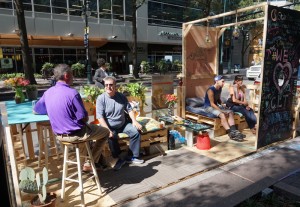 Have you noticed those small patio-looking structures and arrangements around uptown (especially near Romare Bearden Park and The Latta Arcade)? They’re called ‘Parklets’, and they have been officially sanctioned by the city as a way to increase pedestrian engagement.

A Parklet is basically just a small public park. It’s an extension of the sidewalk over an on-street parking space. Parklets help reclaim a small amount of public space, contributing to an active, accessible, and vibrant urban environment. Typically, Parklets are no more than two parking spaces long, extending out from the sidewalk to the width of the adjacent parking space.

Charlotte’s first Parklet was built on Church Street, right next to Brevard Court, and was part of the city’s pilot program to determine if it will become a permanent program this year.

More Parklets have been built throughout uptown in high pedestrian traffic areas. They must all be built within marked, on-street, parallel parking spaces on streets where the speed limit is 35 mph or less.

If you’d like to have your own personal parklet funded by the city, check out the Pilot Parklet Program manual here.