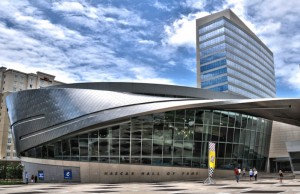 The Chiquita headquarters vacated 6 floors of the NASCAR Hall of Fame building toward the end of last year, and now they found a tenant to sub-lease half of the 138,000 sqft space – the Charlotte Observer.

The Observer just announced that they will be moving out of their original 360,000 sqft building, a space they’ve occupied for 44 years, to move into 3 floors of the NASCAR building.

Local developer Lincoln Harris is now under contract to buy the old Observer building, which will soon be one of the largest developable tracts in Uptown Charlotte (9.4 acres – about 2 city blocks). They haven’t released plans yet as to what will be built on the site.