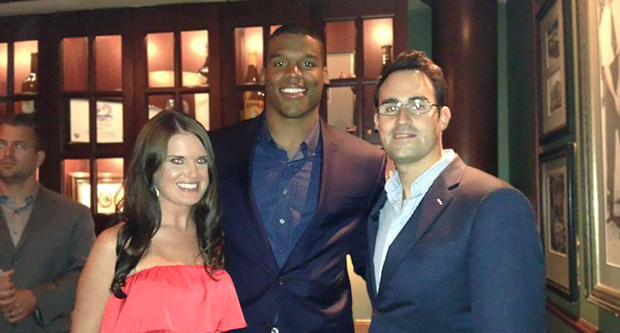 If you’ve ever had the pleasure of meeting David Hoffman, you may not have realized that he’s the head of one of the fastest growing real estate firms in America, with offices in LA, Tampa, Charleston, and all over the Charlotte region. His humble demeanor and warm attitude make you feel like you’ve known him for years – maybe that’s why he’s been so successful in a city full of transplants.

After being raised in New York City and working as an economist in Washington, DC, he moved to Charlotte in 2005 to start a new career as a real estate agent. David told me that he was initially unsure how he’d be received in a southern city – especially not knowing many people here.

Uncertainty quickly turned to surprise as Charlotte embraced him with open arms. He helped 46 clients buy or sell a home in the first year, and earned Allen Tate’s prestigious Rookie of the Year award. This opened the door to a rare mentoring relationship with Mr. Allen Tate himself in 2006. Since then, David has been pouring back into the city that embraced him; serving on the City of Charlotte’s Zoning Board, NC Board of Trustees for Leukemia and Lymphoma Society, Jon Beason’s Making Lives Better Foundation, and as the President of the Charlotte Junior Chamber – he also narrowly lost a political campaign to become the Mayor of Marvin.

In March of 2013, the David Hoffman Group, Inc., (DHG) in affiliation with Keller Williams Realty started its first office in Huntersville and has since built more offices around Charlotte, as well as in South Carolina, Florida, and California.

David is now regularly featured on local and national tv for his work in real estate, and as an economist.

I asked David what advice he would give to other Charlotte transplants;

“Go all-in with your goals, because Charlotte WILL embrace you, and your dreams! Just be sure to treat others how they want to be treated, while showcasing your knowledge, passion, and expertise, and always being present wherever you are, and you will realize your dreams here!”