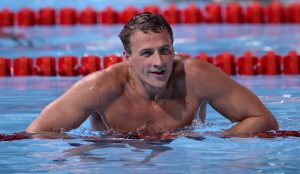 Three members of Charlotte’s SwimMAC Carolina’s Team Elite have just qualified for a trip to the 2020 summer Olympics in Tokyo.

Kathleen Baker, Katie Meili and Ryan Lochte have officially earned spots on the U.S. Olympic swim team and are about to compete against the best in the world.

Baker couldn’t stop smiling in a poolside interview with NBC shortly after making the squad by finishing second in the 100 backstroke final. “I am literally shocked,” she said. “I’m about to cry. This is so amazing and I am so happy to be an Olympian. This is awesome!”

Baker, 19, originally moved to Charlotte at age 14 so she could swim for SwimMAC. She was home-schooled so that she could better coordinate her intense swimming schedule with her academic schedule with her swimming. Baker, a top recruit last year, just returned to the Queen City from her freshman year at Cal-Berkeley to continue her training with SwimMAC.

Another emerging swimmer is Katie Meili, 25, from Colleyville, Texas – she graduated from Columbia in 2013 and moved to Charlotte to become one of America’s best in the breaststroke.

Ryan Lochte will be in fighting for his 12th Olympic medal this August during the 2020 Summer Olympic games.

According to Doug Williams with Mcall, “betting on Olympic sports will soon be available to bettors in more states than Nevada, thanks to a Supreme Court decision that opens the door for states to allow sports betting.”

Because of the new decision, betting in states across the nation during next year’s 2020 Summer Olympics should beat the record of placed bets.

Super Last-Minute Ideas For The Ultimate Valentines Day in Charlotte